Kitchen Contest is a competitive cooking story game for 3-4 players.

Create a Chef and test your mettle to see who can be the Winner in a contest to cook the most delightful and delicious dishes!

Create a Judge who scores the competition to determine the Winner!

Contains variants for playing different kinds of contest, 1 person or 2 people with one Chef and one Judge.

This game uses 6 six-sided dice or a virtual dice roller and note paper or a text document to track progress.

In order to download this game you must purchase it at or above the minimum price of $5 USD. You will get access to the following files:

Support this game at or above a special price point to receive something exclusive.

Each copy of Kitchen Contest you purchase makes a Community Copy available to someone whose budget doesn't allow for them to pay the full price.

If you are interested and unable to budget for this expense please claim one of these free copies.

If there are no Community Copies available and you represent a marginalized group and would like to request a copy for free, message me on Twitter @HansCTweets.

I have not played this yet but I am BUZZING with anticipation for roping some friends into it. It's such an elegant system for emulating your favorite cooking reality shows and feels so hackable.

The basics: what does it claim to be? It's a competitive rpg (don't see many of those) but it's also "a game you tell with your friends." Immediately there is some friction here: a quasi-storygame that asks you to be in conflict with each other? But it works.

This friction helps create the feeling of a show like Chopped, where there's competition but also the awareness (on the part of the editors at least) that everyone is contributing to an overall story. The game puts us in the seat of the contestant, judge, and editor all at once.

The basic mechanics: use d6s to create target numbers for 3 courses that the chefs are trying to hit. They roll dice themselves and during each round have the chance to reroll one of their dice (Transform), reroll someone else's die (Sabotage), or simply vibe (Savor).

I want to draw attention to the Savor action. Each of the 3 actions have associated questions to help develop roleplaying, but Savor is unique in that there is no benefit to be gained. This is a fantastic rp moment. Are you cocky? Panicking? Non-confrontational? You decide!

Now let's talk about modularity. This game is endlessly hackable. It's a rare game that feels both like a complete game and its own SRD, but this one does. 5 bonus game modes to accommodate different playstyles and # of players.

Each action can be switched up to create different vibes too! Want something like the Great British Bake Off? Take out Sabotage. Emphasize Transform. Stack dice to create new shapes! Add new targets beyond the course ingredients! Have recurring judges!

Want Cutthroat Kitchen? Emphasize Sabotage. Let the action take out dice! Hide them around your playspace! Make others roll w/ their non-dominant hand!

Perhaps the best part about the game is the "Judging and Tasting" section. It breaks down how you might describe a dish, provides adjectives (tags) that Judges can use, and makes describing art more accessible to players that might be intimidated by it.

I ran this game for stream as part of Huetopia's Pride Brunchathon (VOD). This was such a fun game to channel your inner Food Network game/competition show contestant, and really easy to run after reading the instructions. I appreciate the variant rules included to shake things up and for replayability.

Unrelated (but kind of related): if you plan on playing this game as part of a live-stream or podcast, it will be easier if the facilitator plays the role of 'MC' and not being a player vs juggling all three roles of MC/Chef/Judge (learn from my folly!).

This is such a fun game! Hans has perfectly captured the essence of a reality cooking competition with this game. Would be happy to play this as a one-shot or multiple sessions as a series. 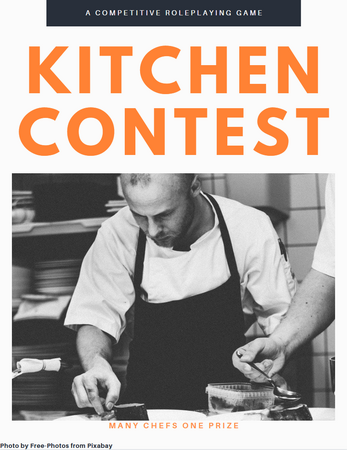 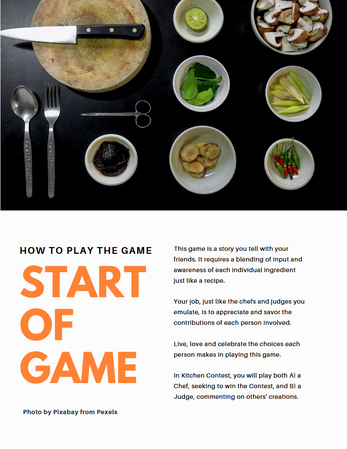 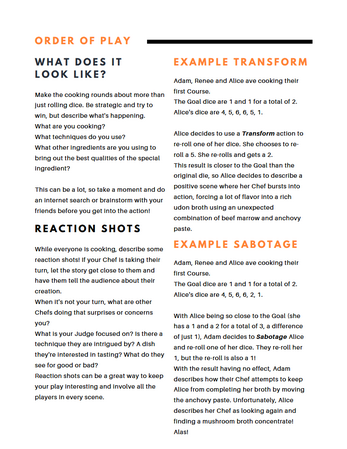 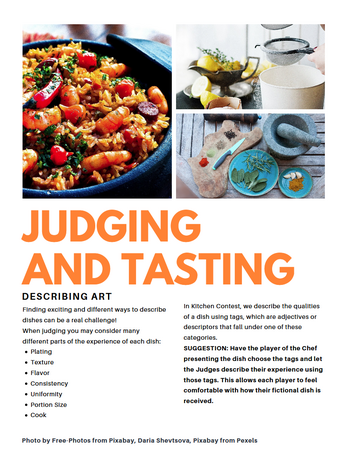